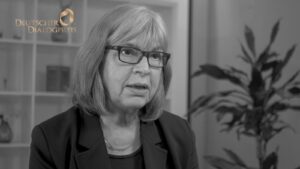 Thank you very much for this kind invitation to give a small speech about Rebecca Harms. I was the Bureau Chief of ZAMAN Daily in Brussels for 15 years until it was brutally confiscated by the Erdogan regime in 2016.

Since the failed coup of July 2016, using the pretext of the coup Erdogan has now his long-dreamed state and constitution with no checks and balances, with no autonomous state institutions. At the height of oppression, hundreds of journalists were jailed, hundreds of newspapers were banned.

With over 700 members of the European Parliament, there was one MEP who did not ask the oppressed his or her identity, religion or political view. There was one MEP who talked to all sides of the political spectrum and defended their rights. Unlike some colleagues of her, there was one MEP who did not think about the reactions she would receive if she criticizes the horrible violations of human rights. So, she was the only MEP who could be a Gulenist, a PKK terrorist and a Soros supporter at the same time. This MEP was Rebecca Harms, the mother of all oppressed. For her, there was only one line, the red line of human rights and fundamental freedoms. When that red line was passed, she intervened without asking what the political views of the victims were.

I remember one specific case. The design editor of ZAMAN was given a life- sentence and was held in solitary confinement. I asked Rebecca if she could do anything. She immediately wrote to the Turkish ambassador asking for the release of the editor. I asked another MEP not from the same party but from a leftist party to do same thing. She told me that coming from a leftist party, it would be suicidal if she would have intervened. Rebecca did many things suicidal without thinking her career.

When Cumhuriyet journalists together with Can Dündar were locked up, it was Rebecca who went all the way to Istanbul to attend the court cases. It was Rebecca who made statements and condemnations when reporters Ahmet Şık and Nedim Şener were imprisoned.

Kurdish issue was another topic Rebecca was heavily involved in. When the former leader of the Kurdish Party Selahattin Demirtaş was jailed, it was her at the forefront of efforts to free him. She was one day in Georgia to stop the closure of a university, another day she was in Kosovo to prevent the illegal deportation of Gulenists.

Rebecca’s work did not only include Turkey. She was also very active in Russia, that is why she is declared a persona non grata since 2014 and was told by the Russian ambassador that she could only enter Russia when she receive an invitation from the Russian government.

Your ticket for the: Rebecca Harms